First vCenter was a VCSA embedded and I was careful with DNS so everything went all right.

Second vCenter was a Windows embedded that had to join the SSO domain and setup a new site. 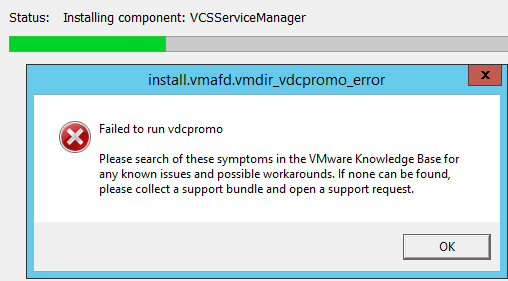 failed to run vdcpromo - on the top part of the error: "install.vmafd.vmdir_vdcpromo_error"

Sean Whitney's post is the only help I found from a Google Search on such an error (and yes, the installation with the generic error 1603 he mentions)

The path where I saw logs was C:\ProgramData\VMware\vCenterServer\logs though, and they only persisted until the zip file was done bundling up.

1) that my SSO password had a ! sign, changed it to a @ - it still happened, so that wasn't it... it sounded weird since we've used VMware1! in VMware labs forever...

and rebooted the PDC - system event logs confirm it's now syncing to this server.

I cancelled the installation, rebooted the vCenter and tried again.

Now it complans i'm off by 16 seconds. Ayayayayay. Then I got it differs by 5 seconds.

Let's try to get this VCSA to sync directly from the lone PDC - I can't make it faster than my freaking LAN.

on the PDC, if you hadn't already, make sure it's a reliable time server:

On the VCSA - enough with the niceties, give me the shell, set the server in /etc/ntp.conf and stop and start the ntp service, then check with ntpq -p like Ganesh does here to make sure everything is working as intended.

And it didn't complain this time. It went smoothly until completion.

So that big error was really a NTP error.

If that's not a gotcha, I don't know what is!